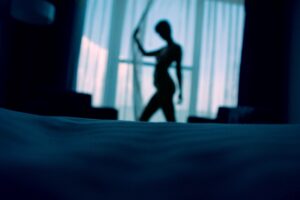 I’ve done endless research and experimentation when it comes to choosing the right vocabulary for sex scenes.

It really depends on your genre and your audience. The basic fact is that there is no one set of words that will suit all audiences.

Ultimately you need to strike a balance between keeping it sexy and edgy but not crude or off-putting. It is very easy for sexual terms to lead to cringe or even comedy.

Words used for sexual organs vary greatly by geography. Non-US readers cringe at terms like “pussy”, it’s very American (and with the infamous Trump line, honestly I’d rule it out altogether for a few years), and “panties” actually makes UK readers think of paedophiles/”panty-sniffers”. It’s that off-putting for us. And US fannies are very different from UK fannies. Avoid fanny. Always avoid fanny. Besides which it’s still a popular female name in France – think of the poor French Fannies out there!

“Dick” and “cock” and “prick” can all sound very harsh and crude unless you’re writing full-on erotica. It can break the emotional intimacy of a scene if suddenly a big hard cock springs up. “Penis” is way too medical and frankly not a very nice word anyway – say it out loud – you’ll see what I mean. Wenis The Penis. Weeny Meany Peeny. SHUDDER. “Maleness” unfortunately has become a bit of a cliché – not as bad as “silken loins” (wtf they are supposed to be!) – you can still use it in certain contexts but tread carefully. Similarly avoid “womanhood” if you can, unless maybe you’re writing a historic virginity loss scene.

The way I have got around it is by avoiding the need to use body part words as far as possible, using descriptors and adjectives rather than the objects themselves, and using a few key terms that seem to be most universally acceptable. Eg:

For the thorny issue of underwear, I’ll use “fabric” or “silk” or “triangle” to avoid the cringe of panties/knicker/undies. Again you can avoid it – “he stripped off the last of her clothing until she was naked before him”. You can sometimes just use the word “underwear” or “lingerie” depending on context. “Straps” are quite sexy – I would always have him “slip the straps off” rather than “undo her bra”. I would also “unbuckle a belt” rather than “unzip a fly”.