The Gentle Prisoner is a retelling of Beauty and the Beast, which the characters themselves are well aware of and constantly refer to. Selfish wastrel father Lucius effectively “sells” his teenage daughter off to a man more than twice her age, who lives in a huge house, collects things, and is a bitter recluse due to a scar from an industrial accent.

The problem, and also the most forceful presence in this novel, is The Scar.

The hero, Nicholas Penryn, is described as being (or having been) incredibly good-looking before The Scar. Now the thing with scars is that you get used to seeing them pretty quickly, like many other physical quirks. And a gorgeous person is still perceivably gorgeous with a single scar on one side of their face. But the heroine, Shelley, never gets used to Nicholas’s scar. It’s constantly described as disfiguring and standing out “lividly” and “twisting the muscles so cruelly” and giving a “sinister lift” to his eyebrow and a “little twist” to his mouth.

I couldn’t get past the scar. I’m not surprised Shelley couldn’t.

There is one scene that nearly gives arranged marriage/forced marriage fans the thrill they’re looking for:

“There’s only one way of getting used to me, you know,” he said. “You married me, my dear. What did you expect?”
“I don’t know,” she said forlornly. “I don’t know…”
“But you expected a lover, surely?”
A lover? No, she had never thought of the dark Penryn as that. He had never spoken of love to her during their short engagement, or if he had, she had not understood.
“A lover?” she said, feeling even then the comfort of his hands and striving to understand him. “But we don’t love one another. You said you didn’t expect that.”
The gentleness went out of his hands and his face was suddenly hard and demanding.
“No,” he said. “I don’t expect that, but I do expect the recognised privileges of marriage. You surely didn’t marry me expecting less?”
“No…” she whispered.
“Come, then, I must teach you. We cannot remain strangers, you and.”
His arms closed around her, and she stood passively against him, her face lifted to his in mute acceptance of whatever he should demand of her. But in the moment before his mouth closed on hers, the moonlight fell full on his disfigurement, cruelly etching the scar that twisted that side of his face into such sinister ugliness. For a moment she could not control her instinctive recoil and she began to struggle.
“Don’t fight me, relax, darling,” she heard him say, but she was beyond reason, beyond pity
“I can’t… I can’t…” she cried. “Nicholas, forgive me, but I can’t…”

There’s a whole Secret Garden style subplot with a small boy practically locked up in his bedroom. There’s no Other Woman, because who the hell could get past The Scar? In Beauty and the Beast the hero finally turns back into a handsome prince. But there’s no magical plastic surgeon popping up for Nicholas. The Scar remains. No wonder that Shelley is still a virgin on the final page.

There’s the usual Sara Seale age play. Shelley is eighteen, but Nicholas actually mistakes her for a young child when he first sees her. Later he mentions that: “Perhaps you should have been my daughter and not my wife, Shelley” and “from the time when I brought you home, and you looked at me with those grave child’s eyes and thought me a stranger.” 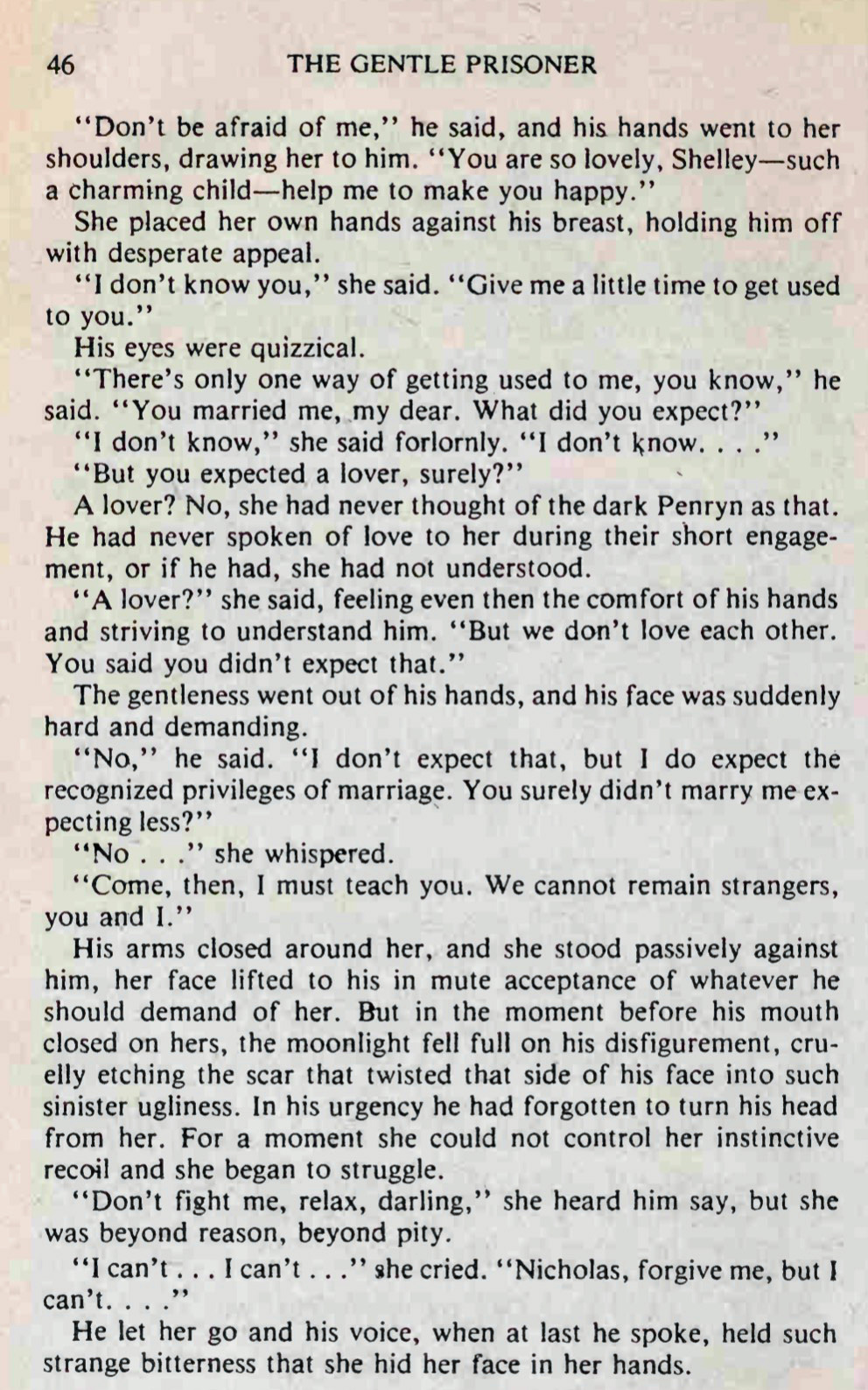