Stormy Petrel was written in 1941 and is not in any way a typical Mills & Boon/Harlequin romance. The ending is not what you would expect.

The plot: Toni is 15 when Dr Lister Shaw (30s) “rescues” her from a London slum. She stays with him and his partner, the older Dr Bussey Benton, before going to live with Lister’s widowed sister Mary. We’re not told exactly how old these people are, but apparently Mary and Bussey are only about six years older than Lister. Which is odd, because Bussey is continually described in terms of being a very much older man, with bushy eyebrows and so forth.

Most of this book is reasonably conventional Sara Seale. Very young, orphaned heroine, described as looking even younger than her years. Older man as romantic interest. A mother-figure to act as foster mother and chaperone. Over time, a few kisses. You could be forgiven for assuming you knew where it was going.

The other woman is Celia, a spoilt socialite. Lister breaks with her early on, she marries someone else, but then divorces him and is free to marry Lister again. Readers may be disappointed and even disturbed by the fact that on p181 (only five pages from the end) there is this scene between Celia and Lister:

He felt her tremble suddenly, and his arms were round her and he was kissing her roughly. 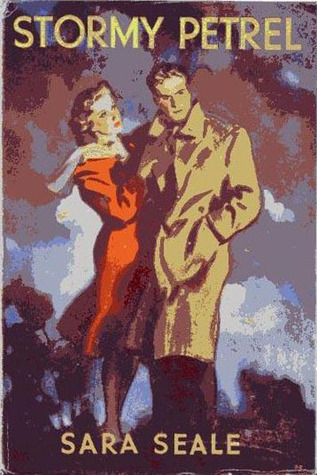 Not really what you’d want at this late stage of a romance, is it? Also, Lister has decided to fully focus his practice on the “fashionable West End” of London, despite this meaning he has to split up his partnership with Bussey, and the poorer patients he originally served. And his “love” for Toni has remained frustratingly lukewarm, though he dashes to her side when he finally discovers she is seriously ill.

Toni decides to marry Bussey. Bear in mind she has had no romantic feelings for him throughout the entire novel, no sexual attraction, nothing. And that’s it. That’s what you get. That’s how this ends. She’s switched father for grandfather, after supposedly being totally in love with Lister for over three years.

If you come across a copy of Stormy Petrel, by all means read it, for curiosity’s sake. But I ultimately don’t think it’s worth seeking out. It’s all rather sad and tired and hopeless, and I’m surprised Mills & Boon didn’t commission a rewrite (which wouldn’t have been a lot of work) when they published the first paperback edition in 1976.