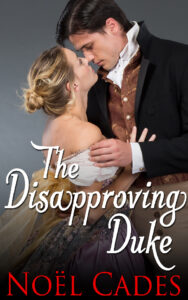 The Disapproving Duke, until now exclusive to Radish, is now available as an eBook, on Amazon and and on Smashwords (and eventually other platforms).

“I have observed you dancing with other men. I pity your family that you make such a spectacle of yourself!”

When the Duke of Eastleigh first sees young, beautiful Diana St Clair, he’s determined to disapprove of her. But when he gets his wires crossed at a ball, he’s forced to apologise… as he realises his true feelings for her.

But what happens when a jealous woman tries to ruin everything?

The Disapproving Duke is a traditional English Regency Romance in the classic style of Jane Austen and Georgette Heyer.