Noël’s new romantic mystery adventure story, The Winter Clock, is being exclusively serialised on Radish this December. A new chapter will be released every day, with the finale arriving on Christmas Day. 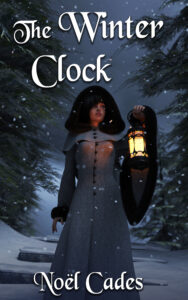 What secret lies hidden in the Winter Clock?

A mysterious legacy. A secret society.A code locked away in the cogs of an ancient clock. An legendary treasure lost for centuries.

Holly’s quest to solve the mystery of the Winter Clock takes her to snowy Bavaria where she meets a romantic stranger and the last man in the world who can fix it. But unknown enemies are soon on her trail.

Will she unlock its secrets before time runs out?

You can read The Winter Clock on Radish HERE