Just what is going on with the cover of this book?

I mean seriously, WTF is this? 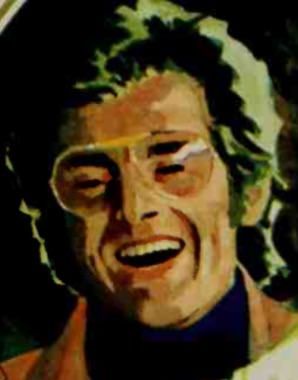 The hero looks nothing like that photo, for what it’s worth. He has a disfiguring scar, for one thing, and there’s no mention of glasses nor of him looking like the doppelganger of Engelbert Humperdinck.

If you can get past that cover, and I wouldn’t blame you if you couldn’t, you’ve got a typical Sara Seale set in Cornwall, albeit possibly one of the least entertaining novels of hers that I’ve read so far. This is the fifth Cornish Seale novel I’ve read, and it was almost indistinguishable from The Dark Stranger. Complex family with warring brothers, Other Woman is the heroine’s relative, the hero runs some kind of mining business, etc. While The Dark Stranger was great, I struggled to enjoy To Catch a Unicorn.

Laura (20) comes to stay with her widowed cousin Cleo, at the house of Cleo’s brothers-in-law. Laura is to be an unpaid nanny to Cleo’s son, Nicky. There’s a lot of dreary stuff about the hero, Dominic (30s), being jealous because younger-brother-charmer Peregrine has managed to win the nephew’s affections instead of him.

I never felt any passion between Dominic and Laura, there was merely this on the last page:

“We have to discover one another slowly. As for me – part of you will always remain the endearing child I first loved. Shall you mind?”

She rubbed her cheek against his, feeling its roughness, and felt, too, the roughness of his toiler’s hands as they touched her flesh.

“No, I shan’t mind. I’ll mind nothing ever again as long as I’m with you,” she said, before offering him her mouth, and the ardent pressure of her young breasts against him…