Caroline is the first book that Anne Mather wrote, in 1965 when she was just 19. While her talent is already apparent, it’s a very naive work in many ways. 17-year-old Caroline has lunch and a dinner date (yes – literally just two dates) with her handsome boss 39-year-old Adam Steinbeck.

After this briefest of brief relationships, if one can even call it that:

She was in love with this man; loved him so completely that she knew she would never be the same again.

Adam, a widowed business tycoon and father of a grown-up son, has also supposedly fallen in love with Caroline but keeps holding off. There are many moments when Adam himself seems emotionally more like a teenage girl than a mature, widowed, business tycoon. I can’t blame Anne Mather for this, because it’s exactly how I depicted “adult men” in romances I wrote in my teens.

“Sure, when I heard about you and Davison I was mad, flaming mad, and jealous too. The minute my back was turned there you were, out with some other kid. Okay, that was that. Maybe you had your reasons. But it made me realise that you’re only seventeen, and at seventeen you can’t be expected to remain faithful to one man. You want good times, young people to associate with, and I could not and would not want you between dates with other young men.”

The main problem with the book is the structure. Adam ditches Caroline and goes overseas. Caroline starts dating Adam’s son John. She sees him nearly every night for weeks before even kisses her. They become engaged. John knows Caroline is in love with his father but is hoping she’ll fall in love with him. They go to Paris together but don’t share a bedroom. All in all they’re a couple for about four solid months, compared to about four days that Caroline was “dating” 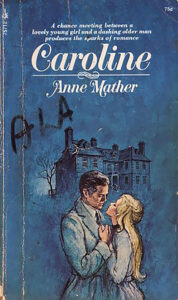 One suspects that Anne Mather may have been on the innocent side herself at this stage of her life, at least where young and amorous men were concerned. Even with the slightly more conservative mores of the 1960s there are very few blokes who would take their fiancée to Paris and book separate rooms.

Then Adam has an accident and Caroline jets off to America to see him, only to be rejected. There are endless scenes with Adam’s mother whom Caroline pours her heart out to. Then Caroline falls off a cliff – no, literally – and Adam hauls her up with a clothesline. He arranges it in a slipknot around her waist: wouldn’t this slice her in two? It’s not an experiment I fancy trying, at any rate.

Anyway, to give some idea of the issue here:

So at least 60% of this book is Caroline not-being-with Adam, and having endless grumpy teenage angst about it. I’m also not sure why Adam needs a licence to marry Caroline, surely they could jet off to Vegas and back in a day.

This book is definitely worth a read for its historic/literary significance, as Anne Mather’s debut work. But as a Romance it’s not very satisfying. There just isn’t enough interaction between the two protagonists to make it enjoyable.

3 thoughts on “Caroline by Anne Mather”