It’s always fascinating what sentences readers respond to – and often it’s really surprising. I love getting any kind of reaction, and tracking what people find sexy or funny really helps me when writing future stories. 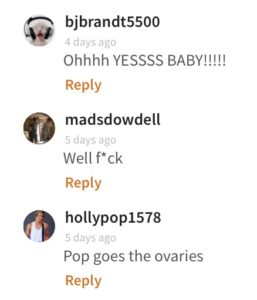 1. He came and knelt down by her. Murmured in her ear. “Like you wanted me to fuck you.”

This, from His Model Student, is my most-commented line (on Wattpad – 647 comments at the time of postingthis). It does come in a chapter called “Shocking Words”, but readers were still shocked by it!

I wrote this as a fairly serious line in Tempting Her Teacher, thinking it might be a genuine way that a very religious young man like Carl might try to deal with inappropriate sexual desire for Juliet. I was surprised when loads of people found it very funny. Either way, I’m glad they enjoyed it!

Hundreds of readers cringed at this line in His Model Student – it’s when Sera propositions Mr Marek. Now bear in mind that this is a man who has regularly been saying the most shocking and sexually suggestive things to her. So it seemed kind of fair enough to me that she makes her own move here. (And he does kiss her at the end of the scene). It was fascinating to see how much people disliked her asking him!

4. It was Lionel, locked in a passionate embrace with Lois.

It seems that hundreds of people had guessed this was coming for the supporting characters in His Model Student, and fortunately were please when it did! (There’ll hopefully be more of Lois in a future novel).

Similarly, many people guessed the surprise guest in French Kissing, but were glad to have been right!