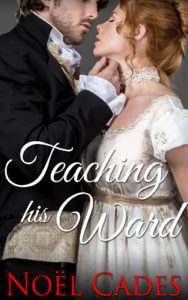 Jemima is tired of the schoolroom and wishes to make her debut in society with her best friend Kitty. When her long-absent guardian, the Earl of Southwell, refuses his consent, Jemima takes matters into her own hands and runs away to London.

Posing as Lady Julia Carlingford, Jemima is soon enamoured of a mysterious and handsome stranger who declines to give his real name.

How will he react when he discovers her true identity?

And what better punishment for a runaway ward than to play personal tutor… in teaching her some rather more wifely duties.

Teaching His Ward is available on:

You can get the app for iPhone or Android.

Teaching His Ward will be coming to Amazon, Apple iBooks and Smashwords this Christmas.

“I loved your story…spent a beautiful wet Wednesday with your Jemima, falling in love ? with the gorgeous Earl!” – P Durie

Teaching His Ward has been a joy to write. Creating two such perfectly matched partners as Marcus and Jemima has been great fun, as well as delving into 19th century history for scandal, fashion and social etiquette.

I really enjoyed making Jemima such a smart and spirited heroine. Marcus may plan to teach her to be a suitably subservient wife, but it’s Jemima – despite her much younger age – who ends up teaching him about life and love.