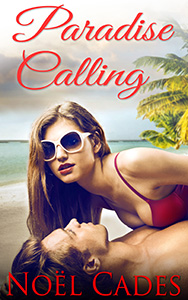 When Caroline is shipwrecked during a school holiday, she finds herself stranded on a desert island with school’s hot Geography teacher, Drew Grant.

Wondering if they’ll ever be rescued, Drew and Caroline quickly develop feelings for one another.

But finally back home and thrust into the media spotlight, how can they navigate their now-forbidden relationship?

An evil ex, a celebrity career and a surprise pregnancy only add to the complications.

Paradise Calling has a special origin. It’s the first novel I ever started writing, when I was about twelve. I posted the original, as-is text to a Wattpad account some time ago.

This is a reworking and continuation of that story. I now know, for example, that you can’t feed a baby on coconut milk! So while I hope to keep much of the text intact there will be changes and additions.

That said, it’s very much in the spirit of the original work even if the plot is a bit fantastic. The very first section (in Italics below) is verbatim/uncorrected from the very first draft.

The setting of the cruise was actually based on a real “educational cruise” that members of our school went on back in the late 1980s. We travelled to places including Greece, Turkey and Egypt. The ship, called the Jupiter, sadly sank some months after our trip with the loss of four lives.

This book is dedicated to the memory of the Jupiter and all who sailed on her.

Paradise Calling is available at:

Caroline stumbled over to the life boat, but somebody pushed past her and got there first. The chaos of the screams, the wind, and the roar of the ocean crushed her ears. In a blind panic she tried to remain calm. At last she reached the life boat, and jumped in. She crouched low, like a scared animal, clinging to the side of the small boat. The salt stung her cheeks, and the wind whipped her hair, causing her eyes to blur with tears.

She could dimly make out another figure in the boat, a man? She was not able to tell who. Another person jumped into the boat. It rocked violently, but Caroline held on even tighter. The craft should hold up to eight, but it was unlikely to be filled: the main ship had not held many passengers, and there were plenty of life rafts.

After hours of cramped, freezing agony she fell asleep. Caroline did not hear the cursing of a man’s voice when he saw the motor was broken. They were safe, they had drifted quite a distance from the ship. The other boats had gone a different way, but they were unable to do this with no motor. There were oars, but no one was willing to row, so they could only drift further and further by the current, hopefully to shore.